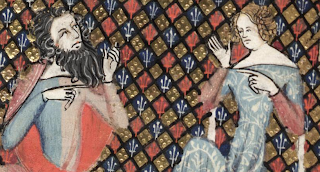 M.S. Bodleian 264, Fol 127 V
This post is going to show how to achieve 4 different Medieval French hairstyles with a few modern materials (because, dear readers, the author does not like the idea of sharp pointy hairpins in her hair. At all.).
The Hairstyles in question are four, but the main style of braid for all is a simple three-strand braid.
If you do not know how to do a three-strand braid, please bookmark this page, google "Three Strand Braid", and come back when you've figured it out.

The style is the somewhat silly-looking 'doggy ears' braided style featured frequently in 14th century manuscripts. The picture for today is from the Romance of Alexander, housed in the Bodleian Library's Manuscript collection. It's dated to about 1340, which just so happens to be one of my favorite time periods in French History.  I will be showing how to do this hairstyle, as well as how to wear it with a veil, wear as side-swirl buns, and how to achieve that 'medieval goddess' style.
To begin...
Materials:
1. Comb
2. Bobby Pins
3. Hair elastics (2 or 4, depending on the style attempted).
4. Hair clips- to secure hair during the process only.
5. Hair that is long enough to wrap around to the back of your head.


A few notes...
My hair is about 27" and is almost too short. You should also make sure your hair is in 'braiding condition'- in other words, the condition in which your hair braids in a neat fashion. My hair was about half-dry in the following photos and was almost too dry. I don't like braiding my hair sopping-wet-freshly-washed as it is too heavy.
Also, I would highly recommend dressing your hair while wearing your chemise/shift/underwear and before you put on your 14th century clothing. Once you get used to the styles, the process will go faster and faster.
Additional items
A.  A circlet or Coronet
B. A veil or wimple.
C. A fillet band (it's like a headband that you use to secure your veil with pins.)
In the future, I will be doing a post on using fake hair. 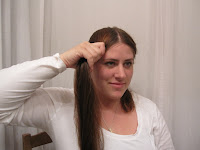 Comb out your hair then divide into two equal sections, using a center part from the front of your hair to the back. Secure the left (or right. In the photo I secured the left) with a hair clip. Comb the right side forward, combing the hair above your ears so that the braid will begin at the temple.
Step One-B 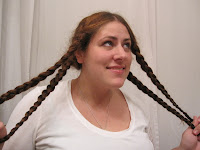 If you'd like to go for the 'medieval goddess' or young lady look of long, flowing hair, try this: instead of just braiding the right side, further divide the right into an upper half and lower half. Braid the two halves separately, secure, and repeat for the left side. Let hair dry thoroughly and remove braids. Voila, medieval goddess hair!
Step Two 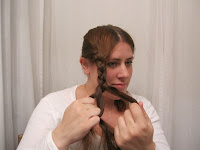 Braid the right side hair, keeping the braid as neat as possible. Secure with a hair elastic.
Step Three 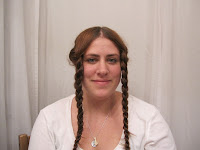 Braid the left as you braided the right and secure with the other elastic.
At this point, if you're planning on only wearing a coronet, skip to Step Five .
If you'd like to have side-swirl buns, skip to Step Ten.
Step Four 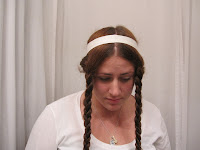 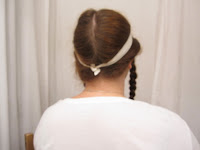 Tie or pin on your fillet band. It really should be secured under the chin, instead of around the head like I have it, but I really don't like the look it gives me when it goes under my chin. Tie or pin it however you prefer, after trying both ways.
Step Five 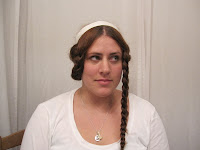 Take the end of the right braid and trail it across the bottom of the back of your head, and secure with bobby pins. It might take some fidgeting to get the level of the braid correct. Use as many bobby pins as you deem necessary. I overuse them, simply so I don't have to mess with my hair during the day.
Step Six 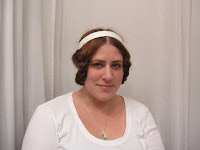 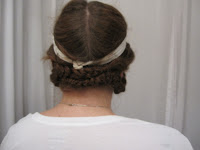 Repeat Step Five but with the other side. At this point, you could have a finished hairstyle if you had just planned on wearing a Coronet and no veil.
Now at this point, you might be saying, 'Hey! That doesn't look like the manuscript!' You're right. My hair isn't long enough to do the weird foldy-thing they do in the manuscript. Like I said, I'll be doing a fake hair post later.
Step Seven 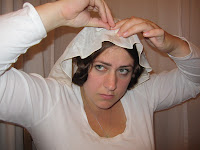 Secure your veil to your fillet band with veil pins.
Step Eight 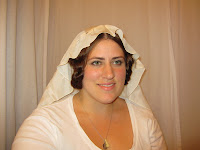 Check your veil placement. You could also stop at this point for a simple veiled style.
Step Nine 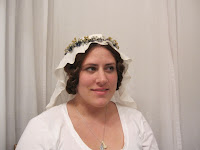 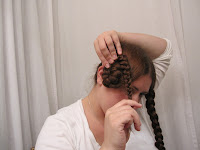 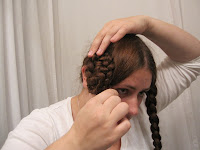 Side Swirl Buns!
After having braided your hair, start swirling the braid, going down and back (clockwise), as if you were putting your hair in a bun. Secure with bobby pins as you go along.
Step Eleven 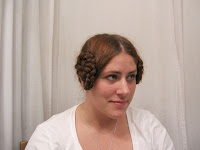 Repeat on the other side. Add a circlet or Coronet.
Step Twelve
This is a bit of a 'bonus', speculative hairstyle. I've only seen it portrayed as a line drawing and not in a manuscript or effigy.Yet. 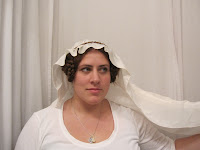 Take your veil and toss it on sideways. Put the circlet on top. 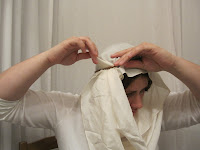 Take the veil tail and drape it across the front and secure underneath the circlet. 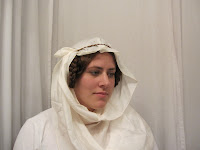 And go about your business!
I hope this tutorial has brought some inspiration to your hairstyles.
If you have any questions, please leave a comment!
Posted by Collette de Valois at 9:17 PM

Collette de Valois
A 20-something Midwesterner who has a ridiculous obsession with anything french and loves medieval history.